Shakespeare is English literature, English History and English Culture folded up inside a collection of eternal works. It simply isn't possible to teach English without turning to Shakespeare at one point or another, and how many historians skip past Shakespeare and his era? As an English teacher of any type, any level, you'll find The Shakespeare Quartos a useful and valuable resource.

The Shakespeare Quartos Archive is a digital collection of pre-1642 editions of William Shakespeare's plays. These include full cover-to-cover digital reproductions and transcriptions of thirty-two copies of the five earliest editions of the play Hamlet.

You can view quartos separately, or alongside any number of copies. You can search, annotate, make public or private sets of annotations, create exhibits or character cue line lists, and download and print text and images. It also happens to be a very nicely laid out website. 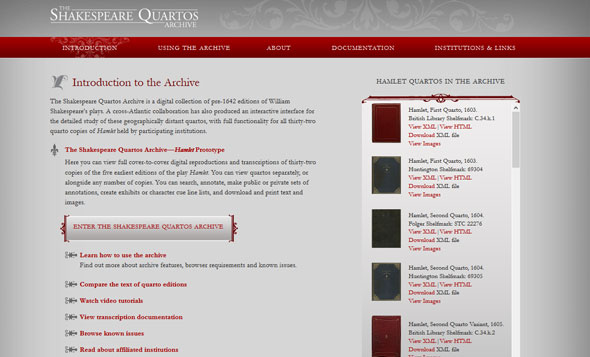